Observations on LTDS data from the Transport Study Initial Findings 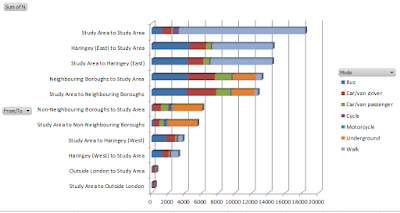 I've been trying to make sense of the LTDS (London Travel Demand Survey) trip data in the study initial findings (sections 2.5 onwards). As I understand it this is based on
survey sample data, where each participant keeps a diary of the trips they make each day - where the trips start and finish, and what mode of transport is used. Things to note:
- I believe it records a round trip as two trips, like if you go from home to the shops and back home again, that would be 2 trips.
- I don't think the data is just from residents of the study area - it just records trips made by anyone, provided the trip either starts or finishes in the study area.
- It doesn't record trips that pass through the study area, like if you went from Walthamstow to Muswell Hill you might pass through, but would not be recorded in this particular data (the NOLHAM data later on in the study document does have this, but collected on a different basis so might be difficult to compare).
- Careful not to overcount car journeys, as the survey participants record separately whether they made a car journey as a driver, or as a passenger.
The chart above shows data for an average day

Observations:
It looks like the most popular journey is within the study area, but as above I think the 18000 trips actually means 9,000 round trips, so actually the most popular trip is the 14000 trips from the study area to "Haringey East", and 14,000 back again (and again as above it is not clear whether these round trips are made by residents leaving and returning, or visitors arriving and leaving) "Haringey East" means anything east of the railway, so includes Wood Green to the north and Tottenham to the east.
The large majority of the 9,000 round trips within (i.e. starting and finishing) the study area are made on foot, which is not surprising as its quite a small physical area - I'm sure most people walk to the shops, to drop their kids at school, etc.
About half of the 14,000 round trips to and from Haringey East are also on foot, a further third by bus, and the rest by car. Again not very surprising - could be either Wood Green and Tottenham residents visiting shops and restaurants etc. in the study area, or study area residents visiting shops in Wood Green and Tottenham.
There are about 13,000 round trips to and from neighbouring boroughs, this set contains the most car journeys - very roughly, car, bus and rail/tube account for a third each. I'd guess this includes a significant number of people from those boroughs visiting Green Lanes shops and restaurants, or Sainsburys/Homebase etc (or for petrol); not sure if visitors form the majority but I wouldn't be surprised. I guess this group also includes plenty of commuters, either visitors who work in the study area, or residents or work in neightbouring boroughs.
Next biggest set is about 6,000 round trips to non-neighbouring boroughs. The majority of these are made by tube/rail and I'd guess is mostly residents commuting to work in central London.
Next in volume is 3-4,000 round trips to Haringey West i.e. Crouch End, Muswell Hill. I'm surprised this is so much less than the round trips to Haringey East, although Haringey East is probably a bigger area. I also have a feeling that the good people of Crouch End and Muswell Hill do not generally like to visit us. Anyway, the most common transport mode is bus but both cars and walking also popular.
The smallest dataset is journeys outside London - seems to be mostly car journeys, I think there may be something wrong with the data here as there don't seem to be any journeys made by rail.
I'm not quite sure what to conclude from all this - I suppose though if we want to reduce car journeys overall we need to dig further into understanding the largest group of car trips, which is round trips to and from neighbouring boroughs. Are some boroughs more likely to use cars than others, perhaps because of poor tube, bus and cycle routes? It would also be useful to be able to break down each dataset according to whether they are made by residents or visitors.