In a previous blog post we linked to some old posts from Harringay Online, between 2007 (when HoL first started) up to 2009. Of course the discussion didn't
just stop then, it has continued every year ever since! Here are some posts from between 2010 and 2012:

2010 A plan to install five sets of gates along Wightman Road - not dissimilar to the filtered permeability arrangements in place during the bridgeworks closure -  proposed by local Police Sergeant Jono Clay-Michael (screenshot below). Several other threads ensued such as this one from forum member Birdy_Too with some possible traffic calming designs. 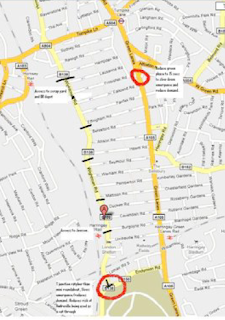 2011 Discussion started by forum member MichaelW of how the six lanes of traffic at the northern junction end of Wightman Road sends a misleading message to drivers that the road is capable of handling high volumes of traffic.

2012 A recurring theme on Harringay Online is reports of refuse and other heavy goods vehicles speeding up and down rung roads even when they have no collections or other business on the road. One example was posted by a Mattison Road resident Bulent Ozlem concerned about damage to the foundations of their house.