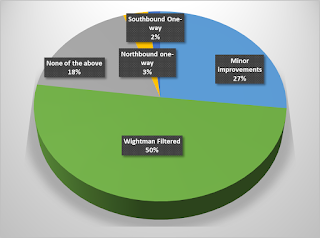 On the Ladder itself, a clear majority of 61% of households support filtering Wightman Road (279/456 responses): 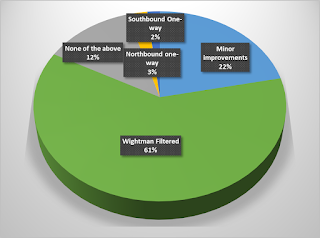 The participation rate in the rest of the Study Area (i.e. the Gardens, St Anns and Hermitage areas, to the east of Green Lanes) was much lower, and those who did participate showed only 12% support for filtering Wightman (17/138 responses): 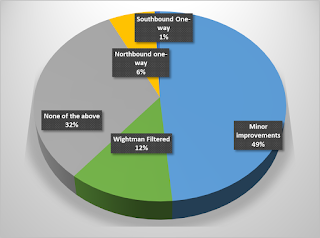 Outside the Study Area (i.e. households in the rest of Haringey, or in neighbouring boroughs), there was a majority of 52% in favour of filtering (92/177): 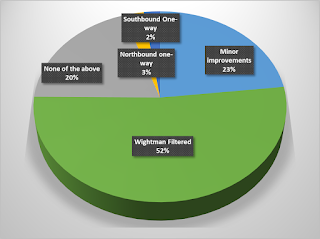 So a huge thanks to everyone who helped by distributing leaflets, campaigning on social media, spreading the word to friends and neighbours and of course by completing the survey!

Unfortunately the campaign is not over, as we understand the council currently proposes to ignore the majority view. Instead, the council plans to further develop some of the options in the "Minor Improvements" package, comprising in the short term a trial of reversing the one-way direction of Warham Road, and investigating the feasibility of moving parking off Wightman Road pavements and onto the road.

Some of the "Minor Improvements" options are desirable, but even taken together they would not solve the fundamental problem of excessive traffic - over 114,000 vehicle journeys per week (well over 1,000 vehicles per hour for most of the day), which is higher than on Turnpike Lane and several other local A-roads. Wightman Road would remain fully accessible to through traffic, and since Wightman Road has far fewer interruptions than Green Lanes, through traffic will continue to use Wightman, plus a Ladder “rung”, as a rat-run.

And so the campaign continues!