A huge amount of data was collected as part of the Green Lanes Area Transport Study in 2016, so we can compare how traffic and environmental conditions changed on many individual streets both before and during the railway bridge roadworks when Wightman Road was filtered. We thought it would be useful to collect links to the available data on this page.

The amount by which traffic increased or decreased when Wightman Road was filtered has been uploaded by HarringayOnline member Andrew to some online interactive maps: 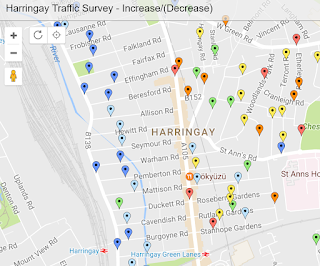 There are three maps altogether depending on how you want to look at the data:

Once you've opened the map just click the marker to see the actual figures (this one shows that traffic actually decreased on Green Lanes by the Arena/Endymion Road junction): 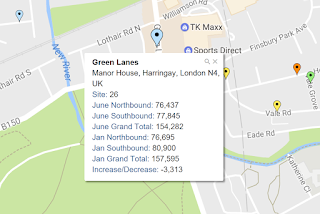 Another HarringayOnline member JoeW has made the January 2016 data available as an online spreadsheet here. The "pivot table" allows you to drill down to see the number of vehicle movements each hour on the days between Wednesday 6th Jan and Tuesday 12th Jan 2016 for any road in the Green Lanes study area (click image to view full size): 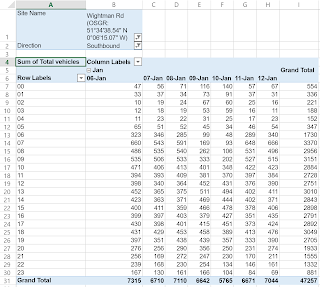 The online spreadsheet will also show the table as a chart, for example the following compares hourly traffic flow on Wightman Road with Turnpike Lane (A504), West Green Road (also the A504), and St Anns Road (B152) (Wightman Road carries more traffic per day than each of these roads but the chart shows this is most notable in the afternoon): 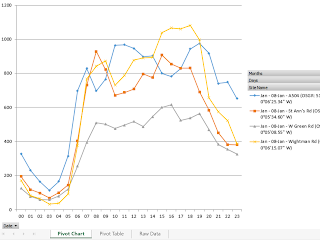 The Harringay Community Group measures pollution at many points on the Harringay Ladder, this chart shows the reduction in pollution between June 2015 before the Wightman Road Bridgeworks and June 2016 when the filtered road layout eliminated ratrunning on the Ladder (click image to view full size):

The above chart shows reduced pollution not only on Wightman Road and the Ladder rungs but also on both Turnpike Lane and Green Lanes. Data provided to Living Wightman by Haringey council's pollution officer Alison Bell also shows a reduction in pollution on Green Lanes itself for the last three months of the bridgeworks: 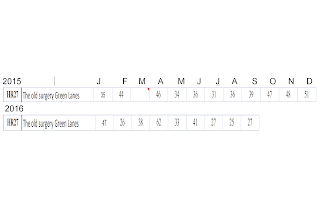