Q2: What is wrong with “Minor Improvements” to Wightman Road?

Q3: Isn't Filtering Wightman Road an unrealistic option because it will cost too much to implement?

Q7: Won’t the local economy and businesses be affected if Wightman Road is Filtered?

Q9: Isn’t supporting Filtering Wightman Road a “wasted vote”, since it will not receive support from other areas?

Q10: Is it possible to Filter Wightman Road when it is a classified B road?

Q11: How do I complete the survey to support the filtering of Wightman Road?

Q2: What is wrong with “Minor Improvements” to Wightman Road?

The first survey option for Wightman Road – described as “Minor Improvements” – does not offer any chance of traffic reduction. 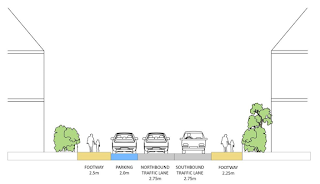 The improvements do move parking off the pavement and onto the road so seems better for pedestrians – but without any measures to restrict vehicles which would no longer need to negotiate parked cars on one side, through traffic could even increase from the current 16,000+ journeys per day. There is also no benefit for cyclists - there's no increase in carriageway width which is too narrow for shared car+cycle use with current traffic levels. Chicanes are also proposed as a “minor improvement” to calm traffic – but these could have a similar effect to the current islands i.e. encourage vehicles to speed up dangerously in order to overtake a cyclist before the next chicane.

Q3: Isn't Filtering Wightman Road an unrealistic option because it will cost too much to implement?

Filtering can be achieved very cheaply with barriers or gates at intervals along Wightman Road – remember how quickly this was achieved at the beginning of the bridge works, probably creating the cheapest one-mile length of safe shared pedestrian and cycling infrastructure in London! In the longer term we hope there will be funding for further improvements to the streetscape (TfL recently awarded Enfield, Waltham Forest and Kingston £30m each for their “mini-Holland” schemes, so money is clearly available for this kind of improvement) 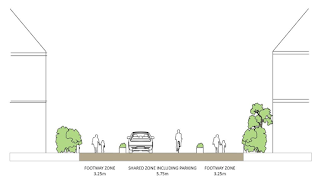 but in the short term the benefits of eliminating ratrunning, reducing noise and pollution, and encouraging walking and cycling could be achieved very quickly and at very low cost.

There were reports of unreliable journey times during the Wightman Road bridge works in 2016 particularly in the first few weeks while traffic adjusted to the new road layout. The key reason for unreliability was the lack of mitigating measures on neighbouring roads – for example traffic light phases were not adjusted for the reduced number of vehicles turning into the north end of Wightman Road from Turnpike Lane, or the increased number of vehicles wanting to turn into Green Lanes at Turnpike Lane station.

There are many other possible mitigating measures to help traffic flow reliably particularly on Green Lanes between the Salisbury and Arena shopping centre, for example reviewing bus lane hours, reviewing parking and loading provisions, banning u-turns, relocating bus-stops and redesigning junctions. The cause of congestion is not the volume of vehicles on its own, but too many reasons and opportunities for vehicles to stop, slow down, or perform manoeuvres (like parking, right turns and u-turns) which cause the vehicles behind them to stop or slow down. There are currently plenty of these opportunities and reasons on Green Lanes and Turnpike Lane – which means plenty of possible mitigation measures! Living Wightman is therefore campaigning for filtering Wightman Road PLUS mitigation measures particularly to improve bus and other journey reliability times through the area.

According to Haringey’s own monitoring, pollution on Green Lanes actually decreased during the last three months of the bridgeworks (i.e. after the initial disruption subsided), compared to the same three months in 2015.

While there may be other factors involved such as weather and wind direction, the most significant difference between 2015 and 2016 was the filtering of Wightman Road, which eliminated through-traffic from the Ladder rungs and caused 8% of traffic across the area to “evaporate”, and there is absolutely no evidence that filtering caused pollution to increase.

Q7: Won’t the local economy and businesses be affected if Wightman Road is Filtered?

Although businesses often claim that they depend on motor vehicles to bring their customers, studies have shown that business can increase when customers have to walk or cycle – typically because customers then tend to make more trips, and although they buying less on a single trip than they would by car, they buy more overall because of the increased trips.
Living Wightman has requested information about how many local businesses applied for rate relief during the Wightman Road bridgeworks, as this would provide some indication of the impact on the local economy. We understand that so far only five local businesses applied for rate relief, and only one of them was successfully granted a small (£400) reduction in rateable value.

Obviously if Wightman Road were one-way then any journeys going the other way – half the current traffic - will have to find an alternative route. 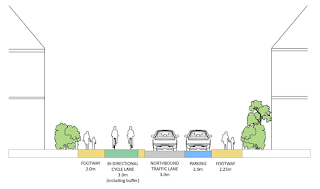 However the new one-way road is likely to become an even faster route – cars and vans can cruise uninterrupted from one end to the other without having to negotiate oncoming vehicles or cars parked on both sides. Ratrunning on the Ladder rungs also becomes an easier option since cars can enter or exit Wightman Road without needing to cross oncoming traffic. For these reasons, a one-way system will induce even more traffic through the area i.e. traffic will start to increase again. And, given the number of new building developments locally (e.g. new housing at Hornsey Station and Haringey Heartlands, housing and a new Sainsburys at Smithfield Square, and most of all the demolition and rebuilding of Wood Green shopping city), one-way traffic along Wightman Road is quite likely to increase back to current levels or worse.
Some people may be tempted by the idea of a cycle lane under the one-way system, however it would be very expensive to create a properly segregated cycle path to ensure cyclists are safe alongside all the extra speeding cars; much cheaper to filter Wightman Road which creates a safe shared space for the pedestrians, cyclists and the few motor vehicles which actually need to be on Wightman Road, without the need for costly segregation measures.

Q9: Isn’t supporting Filtering Wightman Road a “wasted vote”, since it will not receive support from other areas?

We believe there will be strong support locally – the petition which Living Wightman took door to door along several Ladder roads showed around 80% support for a drastic reduction in traffic, and filtering is the only option which will deliver that permanently. There will also be strong support from other areas –cyclists who commute through the area for example. Harringay Online showed almost 60% support for filtering, and we’ll be campaigning to make support for filtering even stronger! 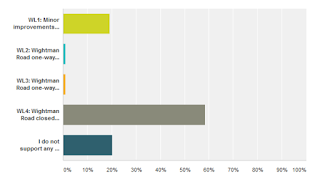 A straw poll on

Q10: Is it possible to Filter Wightman Road when it is a classified B road?

Wightman Road was designed and laid out as a residential street in the 1880s and is exactly the same width as all the Harringay Ladder rung roads (except for Burgoyne Road which is a bit wider). It was classified by the Ministry of Transport as a B route in the 1930s many years before car ownership became widespread and with no thought as to the environmental impact. About 50 meters of Wightman Road was widened in the 1970s but there is no possibility that the rest of this one-mile long road can ever be widened by even as much as an inch. Given the carriageway, pavement and house frontage widths, and predominantly residential character of the street, it is quite unsuitable for carrying the volume of traffic currently seen - over 1,000 vehicles per hour for most of daylight hours. In 2012, the power to classify and de-classify roads in Haringey was delegated to Haringey Council (and we think nearby Woodstock Road and Florence Road were declassified some time prior to that, see this discussion here). 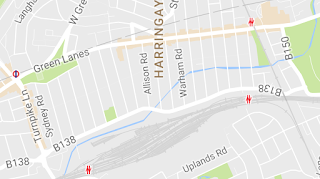 Today, the only effect of calling it a B road is to mislead drivers as to its suitability (it's usually in a different colour and appears slightly wider on maps for example), and to cause SatNav systems to steer even more drivers in our direction. Unfortunately many people mistakenly believe the B-road designation means an alternative route which is suitable for use when the primary or A-roads are busy; the B in B-road does not stand for By-pass! We think Haringey should revoke its classification at once.

Q11: How do I complete the survey to support the filtering of Wightman Road?

Haringey council's engagement survey can be found here https://www.research.net/r/GLATS and it asks for your opinion on ten different "Packages" of options - each Package has between 5 and 14 options.
For each option you can click a button to indicate how strongly you support or oppose that option:

In total there are over 70 options across the ten packages, so please allow yourself plenty of time if you want to read all the accompanying details and answer every question! It is possible to skip the options for any Package if you do not wish to comment on them though.
If all you want to do is indicate support for "Package WL4: Wightman Road Closed (Filtered)", follow these steps: 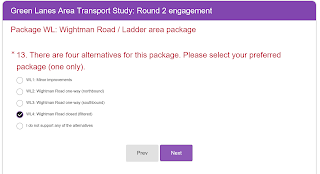 Obviously if you did want to comment on any of the other package options you can click Yes to any Package and then support or oppose the options as you wish. Most of us are strongly opposed to one-way (package WL2 and WL2) and generally support the various area-wide traffic calming and streetscape improvements and cycle schemes. But the single most important goal is to maximise support for Package WL4 as this is the only option to ensure long-term drastic reduction of traffic on the worst affected Wightman Road.

There are major differences between Primary Routes (A-roads) and Residential Streets - the fact that some people live on a Primary Route does not make it a Residential Street.
Transport planners categorise roads according to a hierarchy, from motorways down to bridleways. The two relevant categories here are:
Green Lanes and Turnpike Lane like many urban primary routes do not fulfil their function of carrying traffic between primary destinations perfectly, but that is not reason to let neighbouring residential side-streets take the strain. The ladder rung roads and Wightman Road, are primarily (in fact almost exclusively) residential and, because they are also narrow and have very small front gardens, passing traffic is much more intrusive. Moreover, most of the traffic - around 90% - is simply passing through. In the case of Wightman Road, although it was built with about twenty small shops at each end, many of these have been converted to wholly residential use and many of the remainder are vacant. Wightman Road, and the ladder rungs are incontestably Residential Streets and should be protected accordingly.

Filtering (also known as "filtered permeability"), describes a road layout that is designed to be accessible by some modes of transport (typically desirable modes such as walking, cycling, and vehicles needing access to residents' homes), but prevents access by other, less desirable modes (such as any cars, HGVs or other motor vehicles which do not need access to residents' homes).

The proposed filtering of Wightman Road is similar to the layout that was in place while the railway bridge was being repaired in 2016: 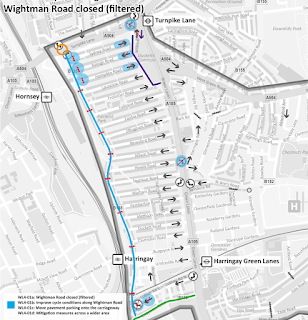 A series of physical barriers was placed at intervals along the length of Wightman Road. The barriers still allowed cyclists to pass through unimpeded. Wightman Road was also still accessible to vehicles, but only via one of the "Ladder rungs" i.e. the side-streets leading off Green Lanes (since the side-streets are alternately one-way, vehicles had to access the area via one rung, and leave by the next).